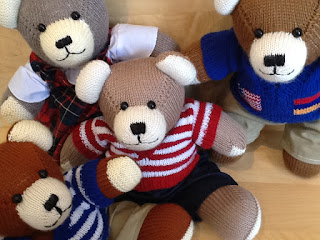 With the Berd Bears being launched on Kickstarter in just a couple of days, I am reflecting a bit on a woman up there in Berd whose whole life has been nothing but hardship.  She doesn't walk around complaining that life is tough, but she has every right to.  She is the very symbol of a tough life-  Married as the Soviet Union crumbled.  First baby as the pogroms started, second as the war broke out.  Her husband went to Russia just as the ink dried on the ceasefire, and she has no idea if he is alive today.  Alone with two kids to feed, clothe and educate.  Border closed.  No job. Sporadic electricity. Can't afford gas heating.  Muddy, potholed streets.  All that tough stuff that Berd has been the past 20 years, for all of them there.

Then a random foreign guy comes along and says that a German nun did a great job with teaching them how to knit bears, and that in a year's time all the ladies will be making bears and bear clothing.  Yeah, sure, what planet are you from?

Fast forward a year.  Kickstarter is going to splash their teddy bears all over the internet, and people around the world are going to go amok hitting the 'support' button- support for the women of Berd.  It is not only a teddy bear, it is a message of hope and optimism from one of the most difficult areas of Armenia to live in.  It is jobs. It is shoes for the kids.  And it is a fab teddy bear.

I have been watching the women in Berd during that year.  20 years of Armenian independence has been a long, cold winter for them.  It has been a tough life.  And now, because of a teddy bear, a small window has opened for them.  They are growing, blossoming like flowers.  They are working hard.  They have a purpose.  They have a goal.  They giggled gleefully as we filmed them for the Kickstarter film clip.  They fuss over the teddy bears, making sure the smile on each one is exactly correct, the length of the dress just right.  It's great to see.

Respect for the women of Berd.

Things can only get better.